Sale on canvas prints! Use code ABCXYZ at checkout for a special discount!

This is a second image from yesterday at the White Sands, New Mexico. The best time for me to make landscape images seems to be when a new weather system moves into an area where I am photographing. Often the clouds that herald the start of a new weather pattern are quite interesting in their variety and shapes. If the weather has seen overcast skies for a period of time and then a new front moves in what I see is the breaking up of the overcast being followed by a mixture of clouds. In similar fashion, if the sky has been cloudless with brilliant blue skies, when the new system arrives the sky has a variety of clouds presented. In this way I can predict to some extent whether I will be wise to go out with my camera for something more special than a blank sky. Naturally there are no guarantees that this will work out...

I thought it was time to start a blog where I could comment on some of my experiences and share some of my images from my travels. I am a 66 year old ex-school teacher who has now been on the road travelling full-time to various corners of the world for seven years. Presently my wife Vivian and I are in the Southern United States for the winter...more accurately we are in New Mexico in the small town of Alamogordo. We have spent the last two months in various parts of New Mexico going where the beauty lies. Alamogordo was chosen for its proximity to the White Sands National Monument.

The image I have chosen to share were taken just yesterday at the White Sands. My wife Vivian is also a photographer (also an ex-school teacher) and she was willing to be my model in this image. The light was wonderful with periods of shade and sun. A slight wind would blow the fabric she was enclosed in which added a ceertain aspect of uncertainty to the outcome of the image. The clouds looked like they were made to order and added greater interest to the over-all result. The fabric is quite light and sheer so it reacted to the breeze and the light in some interesting ways.

So, I start my Blog from activities yesterday...January 12, 2013. I will move forward in time as well as back in time discussing images and events that I hope will interest those who find my Blog of some interest to them. I hope you will enjoy hearing a bit about my travels and what motivates me in my image making. Perhaps you will take time to go into my "Quickie Tour of My Photography" on my FAA site and then into each Gallery that interests you when you have the interest and the opportunity.

Reflections and silouettes can be very useful in creating an image of merit. Water and wet sand both reflect the light from the sky. The sand takes on a different character entirely when it is wet as compared to being dry. Look at the images in my "Death Valley Gallery" and the "White Sands" images in my "New Mexico Gallery" to see how different the sand appears when dry. Use the fact that the sand is brighter when it is wet in making your photographs.
In terms of planning your trip I check the high and low tide charts on-line if I have a chance. Some locations work great at low tide while some work best at high tide. You probably will need to return a few times to "hit it right". Being familiar with your location can be difficult...especially when you are only in an area for a short period of time compared to the local photographers. With some planning and some good fortune you still can have some images the locals envy.
Remember...Safety First when photographing around water or in places you can fall from.

A slow shutter speed using a tripod was the answer to make this image. Once again, same subject but a different technique. In the Sripp's Pier image I utilized a neutral density filter to alllow for a longer shutter speed since the light was quite bright. In this image of Santa Cruz Pier it was quite late in the day and the light was quite low which allowed for a longer shutter speed and therefore I didn't need to use the neutral density filter to cut down the light. When you see images where the water is silky and soft a longer shutter speed has been used. Keep the ISO low (100-400 ISO) and use a tripod. Timing is everything in this shot...watch what the water is doing and how it moves among the pillars. Shoot several on each surge as the price is right and you may like one image more than another. The camera will see things your eye cannot as the water is moving and your eye won't see what your open shutter will.
When I plan my travels I am looking for locations like Santa Cruz Pier. Sometimes I find the subject by accident but more often I have researched what is in the area and these sites/locations become a major part in my plans.

This is an image that speaks to me...and what it says is this..."Be an opportunist". I had spent the day photographing Egrets along the shoreline of Bodega Bay. Late in the day I hiked up on the cliffs overlooking the Pacific Ocean to photograph the sunsetting. Fortunately I had a few interesting shots from the day. On the way back to my RV Campsite I passed by this pier and "voila" the light on Bodega Bay was incredible. The colors in the sky and the reflections of the pier in the water were wonderful.
The whole point of this discussion is "Be an opportunist...scavenger also fits". After the sun has set the light that comes after the sun has gone down may be wonderful so don't put your camera away too soon. Be open to what is around you even if you've had a long day.
This pier image is entirely different than the Scripp's Pier images. It is still a pier and water image but the light and the composition are entirely different...Same subject but different results. 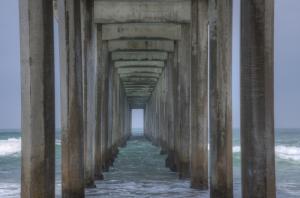 This image reinforces the idea of using a variety of focal lengths when photographing. The first image is a wide angle shot using 18mm as the lens choice. This image is from the same location but I chose a longer focal length of 200 mm. This simple change made for an entirely differnt result. I try to "cover the subject" much like a reporter would do for a magazine or the newspaper...that is, I try to show as many aspects of the subject as I can to tell the story as I think are important. 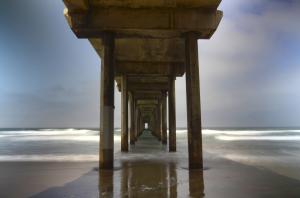 Scripp's Pier is located in La Jolla California which is very close to San Diego, California. I chose this image to share to encourage my visitors to look for as many interesting view points when making photographs. The underside of the pier can be very interesting to those that like to crawl around a bit. Each pier is very different in structure. In this case I have an extremely high pier made of concrete. This makes this structure very different to photograph than smaller and lower ones. It also made getting beneath it simpler.
Choosing the right time to make your photograph is key to producing an image of merit. The West Coast of North America is pretty straight forward as the coastline generally runs north-south. Generally get out before the sun comes up or shoot the last light of day. As the light was subdued with a light fog this worked in my favor to lower the contrast...that is, no harsh shadows.
I used an 8 stop neutral density filter on this image. No color changes with the filter but the longer shutter speed gave the water a softer appearance which is what I wanted to achieve. The mist in the air also added to the softness of the image.
SAFETY FIRST...watch the tide and the waves.

I photographed this Leopard while travelling in Bali, Indonesia. I waited quite a long time for this beautiful animal to yawn and hopefully see his teeth and his tongue.
This image appears "different" if you look closely. It is almost as if the cat is made of gauze...like a net or something. Here is how I produced this effect which is quite simple. There is a computer program called "Fractalius" which isn't that expensive and can be bought over the internet if you like the effect. The program is self-explanatory and simple to use. The program uses Fractals (mathematical algorythms) to produce these results. I will not go into how to work the program but, trust me, it is straight forward and a lot of fun to work with.
You may wish to check out my Fractalius Gallery on FAA to see some of the other effects that you can play with.

The techniques for producing "Big Face Climber" are very similar to the "Seeking Enlightenment" image. The only difference is that I didn't change the opacity of the climber as I did with the Monk. The statue is real and I took this image in Vancouver British Columbia. The climber I photographed in Moab, Utah. Since the light worked out as a composite and the red of the climber's hat would stand out against the statue I chose to make a composite of the two images. A bit of careful erasing on the climber layer to remove the red rock he was climbing and the changing the scale of the climber to make him smaller I was able to make a somewhat believable image.
This digital work on the computer isn't that different in outcome than many very early photographs that were produced in darkrooms of the past. The "Digital Darkroom" has a lot to it and one that requires a lot of time to understand. This is a "fun image" for me as most of my images are not altered very much if at all. That being said, ALL of my images are adjusted to my tastes in various programs to make my images as good as I can make them. Photography great Ansel Adams or ALL of the other great photographers worked long and hard on their negatives in their darkrooms to polish their images before the advent of Digital Darkrooms.
I shoot in the RAW Format almost exclusively. My NEF files are similar to a negative from a film camera...the file and the negative are simply raw information. The JPEG you see on the back of your digital camera is the adjusted view as the camera thinks it should look. Adjustments in computer programs like Photoshop make the image appear the way you saw it or the way you want it to appear...just like the Old Days with Modern Equipment.
I hope you enjoy "The Yawn" (which is the next image for today)...which is what you may be doing about now...Cheers Bob